Neuroendocrine tumors (NETs) are neoplasms that arise from cells of the endocrine (hormonal) and nervous systems. Many are benign, while some are malignant. They most commonly occur in the intestine, where they are often called carcinoid tumors, but they are also found in the pancreas, lung and the rest of the body.

Steve Jobs, as well as Aretha Franklin, both died from Carcinoid Cancer.

Overall, it is estimated that more than 12,000 people in the United States are diagnosed with a NET each year, and approximately 170,000 people are living with one. The number of people diagnosed with this type of tumor is increasing by more than 5% each year. This increase is thought to be mostly related to improvements in the way NETs are diagnosed, including better imaging tests and endoscopy, and increased awareness of these tumors.

When I was diagnosed, the Cancer had already metastasized to my liver, in the form of one large mass, nearly 9 x 9 cm. in diameter,  in addition to my spine.  My primary tumor was in my Ileum – which was removed successfully, along with a foot of both small and large intestine, then rejoined.  I’m still learning all the things I need to know for proper digestion and things that can trigger symptoms.

Did I go to look at the statistics?  Hell YES!   Needless to say, I don’t go to the statistics anymore.  I rarely visit the support groups.  The support groups are, unfortunately, oftentimes misdiagnosed people from all over over the world, searching for a cure.  A glimmer of hope that they have more time.  An understandably frustrated group of people who either have no specialized doctors at their fingertips, or have to fight insurance tooth and nail to even get a diagnosis.  It is beyond discouraging for these people – rightly so – I pray for them.  I’m so thankful and grateful to have the best doctors and surgeons within a 20 mile reach of me.

But you see, there is no KNOWN CURE for Carcinoid Cancer.  You live with the disease until you don’t.  It’s that simple.  Some live a couple of years, some can live as many as 15 years or more, depending how many surgeries and procedures they’re willing to endure to stay alive.

1 Peter 2:24: (KJV) “Who his own self bare our sins in his own body on the tree, that we, being dead to sins, should live unto righteousness: by whose stripes ye were healed.” … By his wounds you are healed.”

I have to give my husband a HUGE amount of credit here, because he is the only one who sees the bad days and has the balls to tell me to get my thoughts back in line.  We have no time for pity parties – although, he’s got the best hugs when I do have my break-downs and just need the support.  Damn, he’s got the best hugs.

I chose straight out of the gate to be honest about my illness.  I took a lot of flack, but I’m an open book, and I needed prayer!  I knew I had prayer warriors out there willing to stand in the gap for me, and I wasn’t afraid or ashamed to ask for prayer.  With that, came a lack of privacy – but that was my choosing.  You can’t have it both ways.  I also blogged from time to time, which is always therapeutic to me, but truthfully, those first three months are a total blur as I was scurrying and scampering so quickly to figure this all out.

I became hyper-conscious of the things I did with my time, the healing modalities I chose, the food I ate, the things I put into my body.  I may never know if they helped, but they gave me a sense of POWER – even though Jesus was trying SO desperately to relinquish the power I felt I had over my life.  I felt some sense of power over an illness that can lead most wracking in a pool of sweat from constant fear.

I researched and have been making THC Suppositories and still use them today (in suppository form, they bypass the liver, therefore you’re not left with a “high”).  I take CBD Oil.  Supplements.  I also researched another alternative treatment that I’ll reserve for another time.

I’ve never shown myself more grace.  Before Cancer, I beat myself up for every little thing.  EVERY. LITTLE. THING.

I was never perfect enough.  Successful enough, pretty enough, you know the drill.  For Gods’ sake, when will we stop feeling so NOT-enough?  When did it start?  Where will it end?

I now realize all those self-sabotaging behaviors were literally killing me slowly.

I’m almost 58 yrs. old, but still thought I could compete with a 40 yr. old.  UM.  NO.  Nor do I desire to anymore.  The wisdom I now have to live MY life for ME, my family and the people I hold dear is SO FAR more important than trying to be someone I’m not. 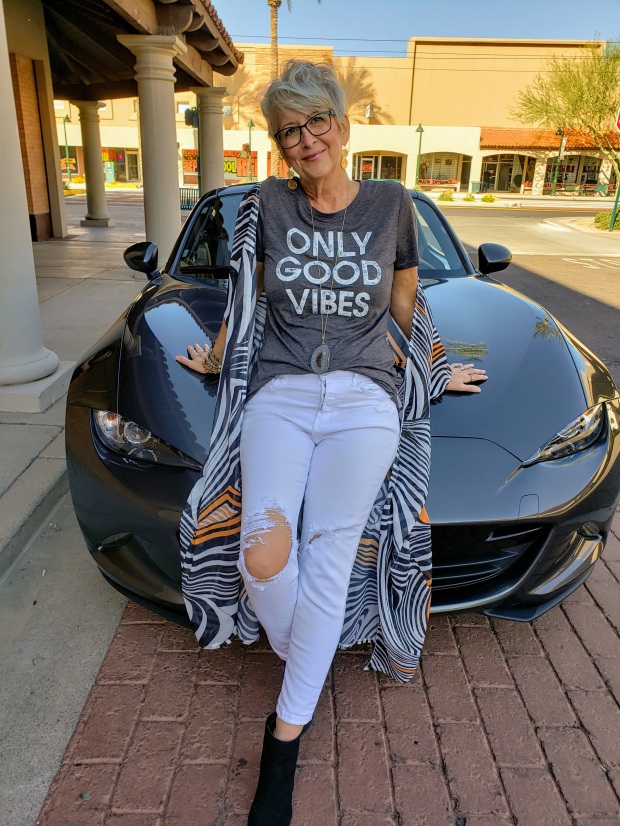 I now make choices for me… every single day. My happiest days are driving with my top down, blasting Van Morrison.  I feel free.  I feel young.  I feel healthy.  I liken it to how my husband feels when he gets on his Harley and just RIDES … thinks.  Feels.  The joy he feels to be in the fresh air.  For me, the rest of my life will be centered more around how I want to “FEEL” vs. what I want to accomplish. 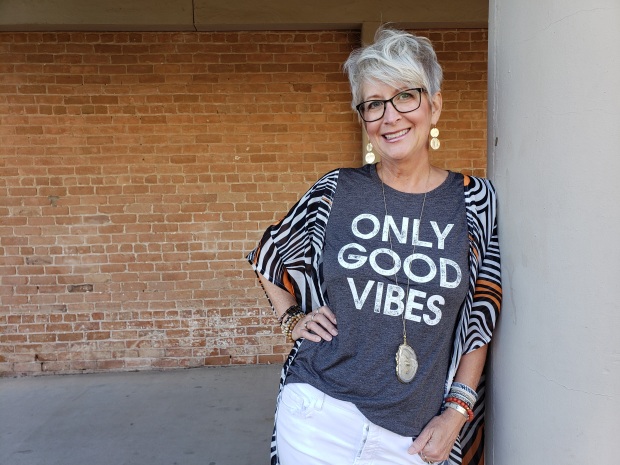 But you look so good!

I know, friends.  I look good – I clean up well.  It’s all good, and it’s truly something that brings me so much joy to put on a cute outfit and hit the pavement for a few hours.  Truth bomb?  Many days, I put on my clothes, my jewelry, take a cute selfie, then take it all back off, climb back into comfy boxers and a t-shirt with no bra and hope nobody knocks at the door.  But you know what?  That’s ok too!!!

When I’m tired, instead of sleeping like I should, I putter and decorate my house and make it as cozy as possible because it’s where I spend the most time.  It brings me JOY!!

I have the greatest support system with my business, and am able to work it when I FEEL like I’m in my wheelhouse as I navigate this new journey of life. 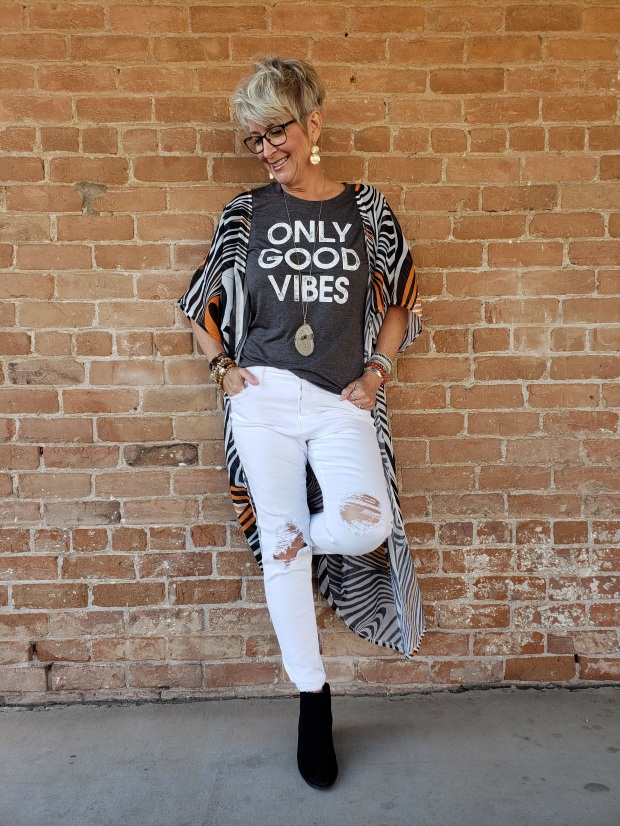 If I told you I didn’t still care about INSTGRAM likes, and growing my following, I’d be lying.  But it’s for different reasons now.  It’s not about selling a piece of jewelry, booking a party, or growing my team – but rather inspiring men and women all over the world that they, too, can choose every single day to be a victim or victor in their situation – despite how dire it looks and feels.  I have a message of hope for others … it goes beyond a business or a paycheck.  It’s a life-or-death message that we speak from our own tongues.  We can believe the lies, or lye in the arms of Jesus, trusting his promises.

Has it been Filled with Cake and Punch?

NO, but have there been some sweet moments – the outpouring of love has been humbling and overwhelming.

I’ve had the biopsies.

I’ve had the major intestinal surgery.

I’ve had the major chemo blast to my liver that I swear almost killed me, leaving them no choice but to perform three separate Pleural Taps to drain over 2,300 milliliters of fluids so I could breathe.

I’ve had the fevers, the nausea…the hair is still in question as to whether I will lose it and how much.

I’ve spent time crying in my bathroom when the thought of not being here for for my family takes my breathe away.

I’ve spent time worrying about my husband.  My family.  My finances.  All those things that EVERY SINGLE CANCER PATIENT WORRIES ABOUT.

But you know what I found out in the end?  None of it matters.

What matters is what we do with TODAY.  This moment.  This second.

Who are we helping?

Who are we ministering to?

Who are we sowing hope into?

Who’s watching us on our bad days, (thinking they’re good days) but somewhere, somehow, it’s allowing them to hold on for one more day themselves because afterall, if I can do it, so can they? 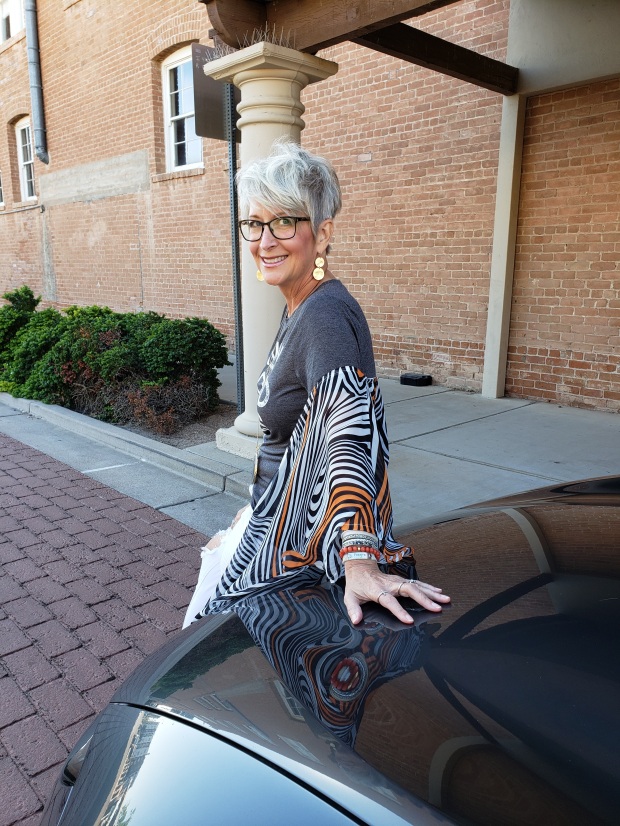 I’m not brave.  I’m smart.  I know I need to somehow love this piece of me because that’s just what it is … it’s a piece of me.  I will not deny it’s existence.  I know God chose me for this journey for a reason.

I bought this Zebra kimono two months ago and never put it on for fear of judgment.

NO MORE.  Whatever it is you find yourself struggling with, know this:  Your problems will NEVER shrink by either IGNORING THEM or NOT DEALING with them.

The choice is yours as to how you live each and every day on this beautiful earth.

Choose wisely – and in the meantime, as I try my best to inspire you to live the richest damned life you can live, do me just one favor.

Thousands of people are battling wars you will never see.